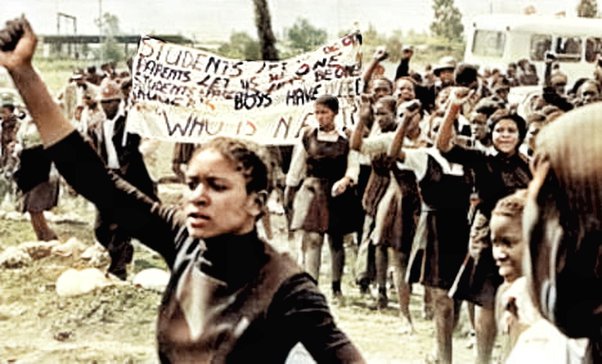 When we speak of June 16, one thing that comes to mind, is Hector Pieterson. Even though student uprisings and the tragic deaths of countless school learners throughout Orlando and other parts of Soweto are the focal points of this day. Hector Pieterson is the main symbol of June 16 due to the fact that most young people nowadays know that there’s a boy who died in 1976 named Hector Pieterson and most of them, albeit taught at schools about South African history which predominantly highlights the June 16, don’t necessarily know what actually transpired that day and how poignant and sacred this day ought to be commemorated.

Let’s go back to January of 1954, when the Bantu Education Act came into effect, making it compulsory for Black learners to attend government schools and learn specific subjects in Afrikaans. The Bantu Education featured separate Black schools and universities, poor facilities, overcrowded classrooms, and inadequately trained teachers, resulting in a lack of quality education for Black children. The Bantu Education Policy was designed to ‘train’ Africans for their roles in the new apartheid society. Which were: worker, labourer, and servant.

In January of 1976, the government mandated that all school subjects be taught in Afrikaans. The Afrikaner-dominated government recognised only English and Afrikaans as official languages, and all Indigenous languages were banned. The decision caused an uproar which led to the morning of June 16, 1976. An estimated 20 000 students from Soweto and the surrounding secondary and high schools, planned to peacefully protest Afrikaans as the primary teaching language in schools. Little did they know this student protest would go on to become one of the most tragic, yet pivotal, protests in all of South Africa’s history. The students began the march to Orlando Stadium, only to find out that police had barricaded the road along their intended route. According to the Mail & Guardian – Africa’s Best Read, the students sang and waved placards with slogans such as, “Down with Afrikaans” and “Viva Azania“. The police responded to the protest by firing teargas and later live ammunition on demonstrating students. The police began to shoot at the protesters and in the confusion and chaos, 13-year Hector Pieterson was fatally shot.

In 1995, the newly elected democratic government declared that June 16 would be Youth Day to serve as a reminder of the progress our country has made regarding equality and equal opportunity for all youth and to honour the youth who lost their lives during the Soweto Uprising. Making the 16th of June a National Holiday. Today we can celebrate Youth Day by commemorating and honouring those who spoke out and acted against the oppressive Apartheid system. We also honour the lives lost in the face of brutalist political systems and all forms of oppression then and now. The students’ brave efforts resulted in international pressure and sanctions against the South African government to amend its educational policies.

We have come so far as a nation and today we are able to remember the sacrifices and contribution that the youth of this country made in fighting systematic oppression. We also recognize and celebrate the youth who lost their lives and are grateful for the tremendous impact on the liberation movement but has there been much progress since 1976?

With the level of unemployment rate having reached 35.3%, the highest in 14 years, according to Statistics South Africa, one might easily be tempted to believe that the Black community has made not much advancement. There are a number of critical areas that warrant attention in gauging whether young Black people have made any progress post-1976. The ghost of apartheid continues to loom over the entirety of South Africa, a poison seeping into the once bright future of the nation’s youth.

The problems holding the youth back do not exist only in politics. They lie also in the overall loss of opportunity in South Africa, which disproportionately affects the youth. While the end of apartheid has led to greater economic opportunity for the middle and upper classes, those who were poor during apartheid have stayed poor. The young in South Africa have felt the burden of this disparity. Kamal Ramburuth-Hurt, chairperson of Rethinking Economics for Africa at Wits University posits that more than 60 percent of the youth in South Africa are unemployed. Beyond the reality of unemployment and poverty, however, it remains important to look at the overall picture of how South Africa has advanced over the years in education, enrolment in tertiary institutions has shown significant improvement since then. Amongst university graduates in 2021, 63% were black, compared to just 28% in 1995. Enrolment of African students has increased markedly, while white enrolment has decreased. This remarkable progress of Black people, post-apartheid, is evidence that a lot has changed for the better for the Black community in South Africa. This is not to say that South Africans are not facing serious socio-economic challenges. The scale of protests over service delivery and corruption across South Africa’s townships is evidence that a lot still needs to be done. The biggest challenge faced by the country’s political leadership is how to get grant recipients out of welfare and into jobs, because job creation is the only sustainable way to improve the lives of the millions of young people in South African struggling to make ends meet.

Post-1976, South Africa’s mission has been to uplift the lives of the millions left behind due to the legacy of apartheid, a system that denied them a decent education and the opportunities to freely make a meaningful contribution to their country. Today we live in a country where the youth is given a chance to choose which school they want to attend, and which subjects they want to study. We are proud to have this generation referred to as ‘The born free generation’ the first generation in which every South African has the same opportunities and racial segregation is a thing of the past. They are the face of a new, free, and successful South Africa. Young South Africans live in a nation that, despite its inequities and failures, is filled with opportunities unimaginable under apartheid. The nation is at the threshold of attaining the prosperity lying just within its reach.

Any cookies that may not be particularly necessary for the website to function and is used specifically to collect user personal data via analytics, ads, other embedded contents are termed as non-necessary cookies. It is mandatory to procure user consent prior to running these cookies on your website.

Previous Next
Close
Test Caption
Test Description goes like this